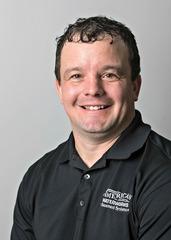 Brian has been with American Waterworks since 1998. He started as a Laborer and promoted to Foreman within his first year. He has also been involved with Sales and Service, but Production is his calling. Brian has been a part of many trainings over the years, but most recently he received a management certificate during training put on by Basement Systems and Supportworks. His day-to-day responsibilities include doing quality control for our Logistics and Production departments. He enjoys working for American Waterworks because he likes to help fix homeowners' problems. He also loves the people he works with. He considers the American Waterworks team as his second family.

In his spare time, he likes to spend time with his family and friends. He enjoys hunting, fishing, spending time outdoors, and taking family trips to the cabin. Brian is an asset to our team and we are lucky to have him!