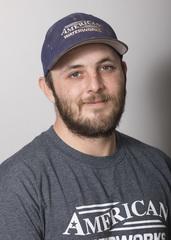 Jeromy joined the American Waterworks Production Team in March of 2019. In the past, he has spent several years of working in a construction environment from working on concrete walls and footing, to framing a house and roofing. He likes to work for American Waterworks because he enjoys meeting all the new people, and he feels a sense of satisfaction when he helps customers achieve the highest level of comfort spending time in their home.

In his spare time, he likes spending time with his friends, exploring the outdoors, snowmobiling, and four-wheeling. Most of all though, he loves hanging out with his dogs.