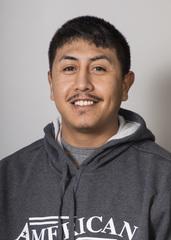 In his spare time, Jorge likes to spend time with his family.