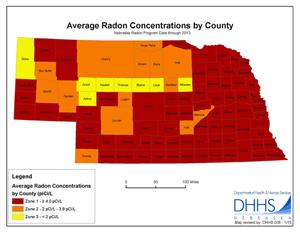 If passed, "[The bill] sets up a task force which will work on the issue of radon-resistant construction standards over the next year and then make recommendations back to us in the legislature in December," Krist told Channel 8 KLKN-TV Eyewitness News, Nebraska’s local ABC news affiliate.

Curtis Drew, president of National Radon Defense, spoke with Channel 8 Eyewitness News about the importance of this bill. "Nebraska needs this legislation because we're at risk, much higher risk than a lot of those other states I named," Drew said. Radon is an odorless, colorless gas that comes from the soil and enters the home.

Nebraska has the third highest radon exposure in the US. A map compiled by the Department of Health and Human Services shows that 72 of the 93 counties in the state are testing at radon concentration levels above 4 picocuries per liter, or pCi/L.

The US Environmental Protection Agency (EPA) recommends taking action if testing shows a radon level at 4 pCi/L or higher. According to the National Cancer Institute, radon is the second leading cause of lung cancer in non-smokers. Radon is cited as the cause of nearly 22,000 cancer-related deaths in the US every year.

The legislation proposed by Sen. Krist recommends new construction regulations requiring homes to have built-in radon mitigation systems. The bill needs to pass to general file before it can be debated on the legislative floor.

National Radon Defense has radon test kits available for purchase. If you would like to hire a professional, find a radon mitigation contractor in your area.