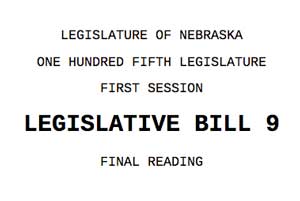 Nebraska's Governor made it official with his signature: Nebraska is taking the first steps to legislate radon-resistant construction in the state. The legislative bill, signed in May, forms a task force responsible for establishing minimum construction standards in new homes and buildings. The task force will present its findings to the legislature next year, with the goal of having the legislature adopt the findings in the following session. According to the Environmental Protection Agency, Nebraska has the third highest radon levels in the United States because of the high concentration of uranium in the soil.

Curt Drew, president of National Radon Defense, testified in front of the legislature in favor of this bill. Radon standards are important for states to establish. Radon is the leading cause of lung cancer among non-smokers. It is odorless, colorless, and cannot be detected without a proper test. Putting radon mitigation systems in homes as they're being constructed is easier than retrofitting a home.

National Radon Defense contractors know how to properly test for radon and install radon mitigation systems in new construction and in older homes and buildings.