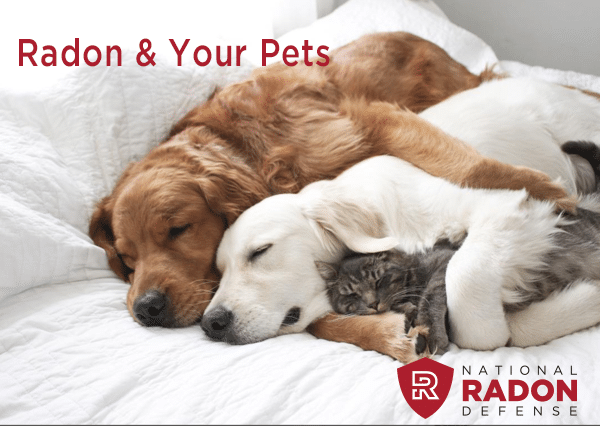 Radon is the second leading cause of lung cancer in humans.  What about your pets? Our friend Kimberly Buchmeier shared her story about her own lung cancer and finding the cause to be radon.  She also shared that in 2011 her dog was diagnosed with lung cancer and she believes radon was the cause of his lung cancer.  Check out her full story.  According to a report called BEIR IV (Biological Effects of Ionizing Radiation)  done in 1999 by the National Academy of Sciences, 21% of dogs exposed to radon developed lung tumors. The report also states radon can cause tumors anywhere within the respiratory tract.

Radon is a hazardous, naturally occurring gas that results from the decay of trace amounts of uranium found in the earth's crust. Odorless and invisible, radon has been classified (by the Environmental Protection Agency) as a carcinogen since 1988. Read more on our site

Pets may not show signs of suffering from cancer until it is severe or in the final stages. According to PetMD.com, there are 10 signs of cancer in pets. Number 4 on their list is coughing or difficulty breathing. Cancer can metastasize through the lungs and cause these symptoms.

The best prevention for your fur babies and your whole family is to mitigate your home.  There are several methods or systems available from preventing radon gas from entering the home while and reducing radon levels after it has entered the building. The EPA generally recommends methods that prevent radon from entering, such as soil suction, that draws the radon from below the basement or crawl space floor pushes it out into the outside air. Other radon reduction techniques that can be used in any type of house include sealing, house/room pressurization, heat recovery ventilation, and natural ventilation. National Radon Defense has more on this topic.