New radon requirements in Minnesota have led to twice as many radon tests being performed in the state over the past two years.

According to the Minnesota Department of Health, more Minnesotans are testing their homes for radon thanks to awareness efforts and a new state law that requires sellers of homes to tell potential buyers whether a home has been tested.

It is estimated that two in five homes in the state have dangerous levels of radon. The safe threshold is considered 4 picocuries per liter (pCi/L) by the US Environmental Protection Agency (EPA). If radon levels exceed the standards for safety, a radon mitigation system should be installed in the home.

The Duluth News Tribune recently discussed how radon testing is becoming more common with homeowners included this infographic in a news story to help readers understand the radon mitigation process. 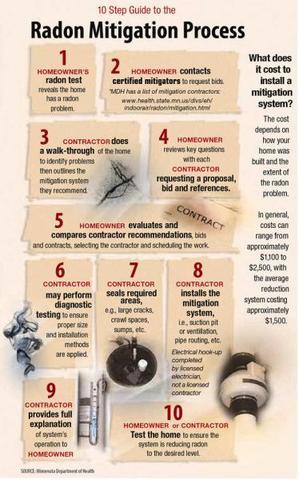 Radon is an odorless, tasteless and invisible naturally occurring radioactive gas that can be found in homes everywhere. Exposure over time can cause lung cancer. Radon kills more than 21,000 people in the U.S. each year, according to the American Lung Association.

National Radon Defense has radon contractors in MN who provide radon testing and radon mitigation services. If you're interested in radon services for your home, contact your local contractor today!